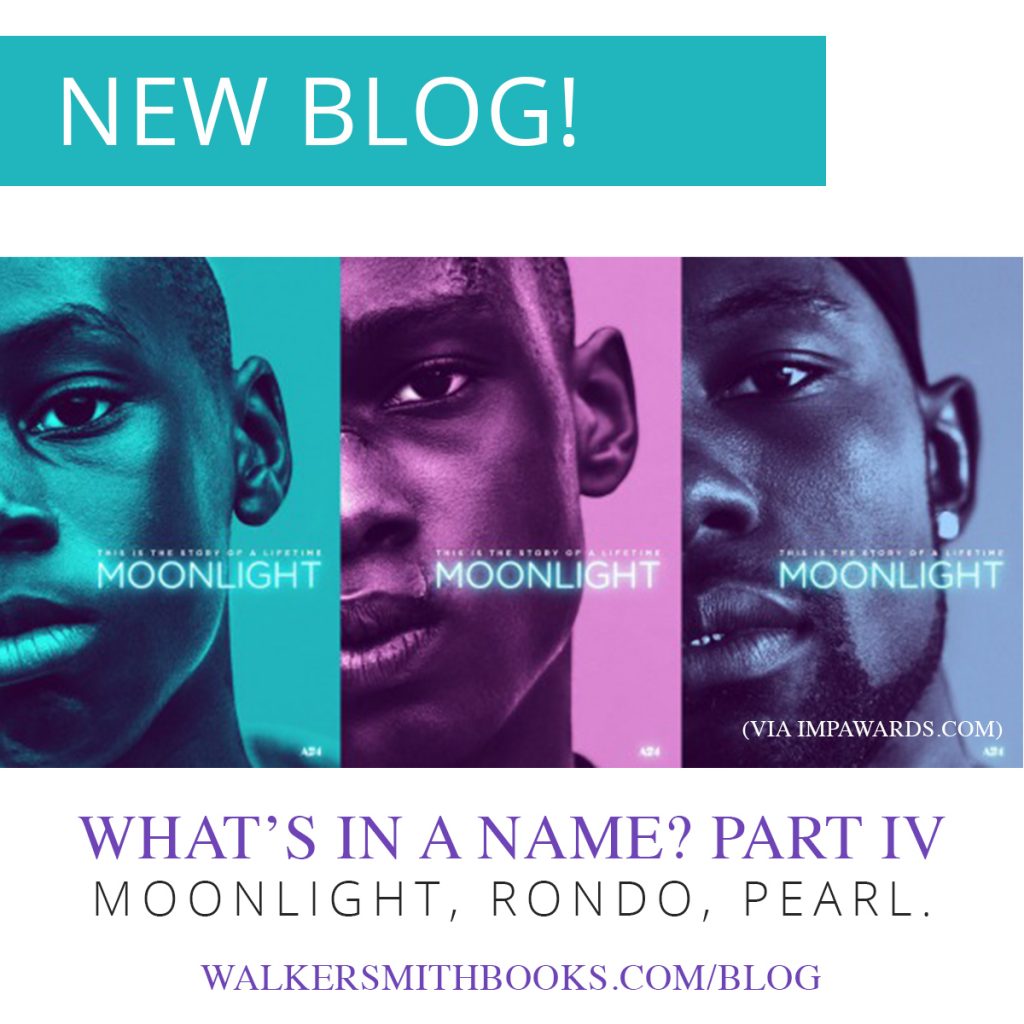 What’s in a name? Do you ever wonder what’s behind the title of a book or a film? At a recent book reading, I was asked how I came up with the titles for my novels. It set me to thinking about titles of some of my favorite books and films. Here I’ll reveal how I chose the titles for my novels Bluestone Rondo and The Weight of a Pearl. But first, let’s moonlight with Barry Jenkins!

Moonlight by Barry Jenkins – After watching this Academy-Award winning film, I couldn’t get it out of my mind for weeks. Aside from the three phases of Little/Chiron/Black’s life, depicted by his changing names, one quote knocked me down emotionally, intellectually, and spiritually: “In the moonlight, black boys look blue.” Simple, poetic, breathtaking truth. Perfect title. I hope Barry Jenkins discovers this blog entry so that he can tell me all the deeper meanings of his amazing story and how it became a personal memoir!

How Barry Jenkins Turned the Misery and Beauty of the Queer Black Experience Into the Year’s Best Movie. Read this article by Greg Tate.

I’ve been asked this many times, so here are the meanings behind two of my titles that are linked by crossover characters: Bluestone Rondo and The Weight of a Pearl.

My racial Cain and Abel novel. Bluestone is the false name that Joe Bailey selects for himself when he begins passing for white. It’s derived from a pair of aquamarine cuff links that a girlfriend gave him, and his brother Calvin coveted not only the links, but the girl. Each brother ends up in possession of one of the cufflinks. For Joe, it’s his good luck charm. For Calvin, it spells doom. Since the thematic substructure of this book was music, I wrote it as a rondo, which is the first line of the book: “rondo (noun) – a musical form with a recurring theme that often repeats in the final movement.”

That’s a clue that the opening scene will be revisited in the final chapter of the book. Doc and Pearl Calhoun are organic musicians: Doc is a trumpet player who lives and breathes jazz. Pearl is a jazz/blues singer, with a deeply evocative story-telling voice. Joe is also a skilled singer, but his song is soulless mimicry. Like their father, Calvin is a terrible singer, and Calvin Jr. goes through life believing that he has “no song.” It’s all revisited in the final chapter. And that’s how I came up with the title Bluestone Rondo.

The characters of Doc and Pearl Calhoun served as the “bridge” for Bluestone Rondo’s musical theme. After so many people asked about their story I decided to write a prequel, which dealt with the early lives of Doc and Pearl. The opening quotation gives a clue to the title:

As a little girl, Pearl suffers poverty and paternal child abuse, her mother often reminds her of the meaning of her name. “A pearl means a symbol. It means – not jus’ love. It means pure love….” So her name, pure love, is sometimes a heavy distinction to live up to, but at the same time, it is her constant inspiration.

On the other side of the world, Doc, who is 19 years old, is fighting in the Spanish Civil War for a people who have been neglected by the world. As a black man, he relates to their cause, and his willingness to die for them is his expression of pure love.

Once Pearl grows up and becomes addicted to heroin, she feels that she is a burden or a “weight” on her family. Strictly from a jeweler’s standpoint, one of the ways to place value on a pearl is by its weight. Pearl cares for others better than she cares for herself, and has no idea of her value to those who love her.

For all these reasons, I titled this novel The Weight of a Pearl.