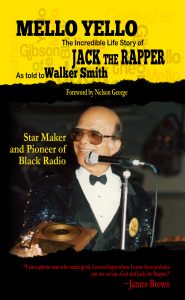 Mello Yello is the intimate life story of music industry legend Jack Gibson a/k/a “Jack the Rapper.” Launching the careers of countless superstars, Gibson forged enduring friendships with some of the most illustrious African American personalities of the twentieth century.

His long reaching influence began in 1949, when he and J.B. Blayton established the first black-owned radio station in the United States. As an emcee and promoter, he built enduring friendships with the early black royalty of the entertainment world, among them, Sammy Davis, Jr., Billie Holiday, Erroll Garner, Sarah Vaughan, Nat King Cole, Pearl Bailey, Dinah Washington, Nancy Wilson, and Ray Charles.

When he was hired by Berry Gordy to head up promotion at a fledgling record company called Motown, Gibson befriended a new crop of stars, including Stevie Wonder, The Supremes, and Smokey Robinson. Moving on to the Revelot label, and then to Stax, Gibson’s uncanny timing once again positioned him to further the careers of Otis Redding, Jackie Wilson, Isaac Hayes, The Staple Singers, Rufus Thomas, Carla Thomas and many others.

In addition to his involvement in the music scene, Gibson gave voice to the history as he lived it—covering the Civil Rights Movement, interviewing Malcolm X, and conducting a man-on-the-street report from Detroit as it burned following Dr. King’s assassination.

With the publication of his influential Black trade magazine called The Mello Yello, The Rapper established a forum for discussions and contributed to sweeping changes for African Americans in radio and the recording industry. But his most long-reaching achievement was his glittering “Family Affair”—an annual black music convention that provided a springboard for new talent. Each year, without fail, the heavy hitters of the music industry cleared their schedules to lend their talents to the Family Affair: Prince, Tina Turner, Nancy Wilson, Janet Jackson, James Brown, Whitney Houston, Eddie Murphy, Hammer, Toni Braxton, Sinbad, L.L. Cool J. And the list goes on like a “Who’s Who” of entertainment superstars.

After being honored by the Rock and Roll Hall of Fame, other accolades began to roll in from the United States Congress, the Smithsonian Institution, and countless other organizations. But The Rapper wasn’t finished yet. With decades of stories and music still alive in his soul, he returned to his roots—radio. Nearly fifty years after his beginnings at WERD, Jack The Rapper’s voice once again crackled across the airwaves in Las Vegas, Nevada, proclaiming three simple words: “I’m still here.”

“Jack The Rapper passed in 2000, but through Smith’s new book on the legend, his eight decades come to full life. Another case of the Walker Smith Experience taking readers on a literary roller coaster ride.”

“Being fortunate to actually have known Jack and attended his “Family Affairs” I was delighted to see the story of this transformative figure in black music. Walker Smith put her literary skills to work by turning Jack’s stories into a must read for anyone serious about learning about the evolution of black music in America from one of its key figures.”

“A significant number of people can credit their personal life soundtrack to one Mr. Jack Gibson, aka Jockey Jack, aka Jack the Rapper — a renowned disk jockey and pioneer of Black Radio with a career spanning over half a century. In Mello Yello, Jack the Rapper shares his own incredible reminiscences, and it is much more than just a soundtrack; it is a first-hand insight into the lives of the legends who created — and distributed — the music responsible for so many important memories in so many people, it has certainly forged the soul of this country. The radio in mother’s kitchen? Jack was there. Stories of his family, his childhood, his wife and children are touching and, as too often happens, heartbreaking. Ballads inseparable from tender moments shared by lovers? Jack was there. Not that Mello Yello is a kiss ’n’ tell expose, but Mr. Gibson was no stranger to the romantic rendezvous. Finally, those dangerous songs that drive you and your crew right over the edge of trouble? Oh yeah. Jack was definitely there. Some of his wild stories are jaw-droppingly reckless, others are infuriating, and many are simply laugh-out-loud hilarious. The best memories are set to music. Why trust them to anything less than a professional? Speaking of professionals; Walker Smith, the author, is a skilled and confident historian. Her novels of historical fiction are meticulously written and are thematically significant and important. Which has many of you now thinking they must be boring as hell —but nothing could be further from the truth. Her prose is lively, she never loses pace, and her characters are full of passion —all while working in the unforgiving confines of history. In fact, to the list of paradoxes associated with time travel, I would add: Time travel must be impossible, because if it weren’t every image ever rendered of humanity — from cave drawing to holographic projections — would include the figure of Walker Smith standing there taking notes. And this unique expertise serves Mello Yello quite well. Jack speaks to us through Walker Smith — his voice, his personality, his rap is as unadulterated as if he were sitting beside us; and the stories all flow together to create a lasting written tribute to a remarkable man.”

“The clever use of song titles for chapters shows that music really is the soundtrack of our lives, and music was Jack’s life.”

“A wonderful book, the stories and the story telling. I bought a copy for my Mom she loved it has some pictures of the entertainers that was an added bonus. Job well done by both the writer and the Rapper.”

“The Ecstasy and Agony of Mello Yello: The Incredible Life Story of Jack the Rapper, by Walker Smith, is an adrenaline-pumping book. This most gratifying read is a unique look at the life of Jack Gibson. Jack takes us on the superyacht of his career. He tells his life story with the exclusive focus on both sides of good and the bad that shades the glamorous life and envious life of the celebrity. The story is one that tells of the growing influence of Black music on diversity and inclusion in America and global culture. If you look at the seamless flow of Jack’s life of revolt, rebranding, and redemption, you will find the climate that gave birth to rap, hip-hop, and urban music today. Jack’s life is also a tale that brings forth sympathy and glittering excitement of the human struggle for relevance. I knew Jack from the late 1970’s and 1980’s while I worked in Black radio news at WAOK in Atlanta for some years. The stories told by Jack are also dear to my heart. Jack unfolded his life to me while bouncing between interviews with him and the stars he attracted, and late night wrap-up sessions during the Jack the Rapper Family Affair Convention in the ATL. He was a civil rights leader. This book shows why Jack deserves respect. Jack deserves our interest because he succeeded to help artists to use their music to move people to feel and do the right thing.”

“Wow is an understatement thus book should be taught in any communications, African American studies, or history of broadcast program! Such a gem!”